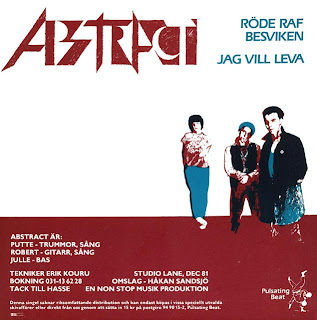 Two more Swedish 7"s this time ... Absolute Beginners and Abstract. If you would like to read more about them (and almost every other Swedish punk band from 1977 - 87 that released a record) you really should get The Encyclopedia of Swedish Punk. Two of the Abstract songs can be found on the GBG Punk Volym Två CD. Absolute Beginners was released by the Pang label which also released many other records with an assortment of punk, powerpop, rock, metal and other crap.