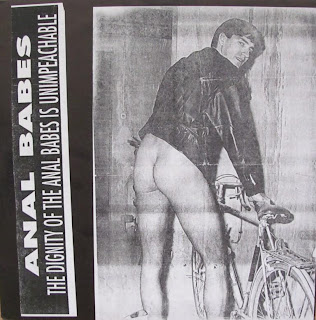 
This record is one of the most essential Rock ever to come from Tellus! The self-produced songs include now classic songs like "Fuckstuck", "Technicolor yodel", "Cornuto contente", "Hezbollah" and "Bad compulsion"

The "B"-side of the album includes cover versions of songs by bands like Freestone ,Punk Force Commando, Unnatural Axe,Vox Pop,DMZ,Alan Milman Sect,Big Balls And The Great White Idiot and BLACK FLAG
The first 500 copies had individual covers-no two were alike-and the vinyl came in nine different shades of brown(!).
A total KILLER in other words.
The record sold out strait away ,of course, and the second pressing did likewise .