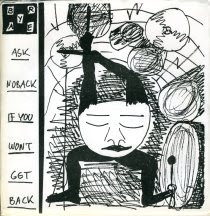 Bayer played drums in Mother's Ruin and also, I was told, the Rebels but I'm not sure about that. His solo 7" is perhaps a little on the weird side for most tastes, especially the version of 'Yellow Submarine'. It came in an oversize 8 1/2 x 8 1/2 inch sleeve that was sometimes also used as a mailer for sending the record.

Jof & The Ram released only this 12" EP in 1981 that sometimes shows up on discographies and sale lists as "punk". The cover came covered in plastic bubble wrap.

Debils released just this one LP in 1981. Three of the songs (Maso / Crisis / Made In Switzerland) were included on the V/A - Made In Switzerland LP along with songs from NDT, Crash Course, Vorwärts and Bellevue (all songs previously released 1981 - 83).

For sleeve scans (except Bayer) see: Punk-Disco
Posted by Mort Subite at 4:30 AM

Thanks for honouring my request, you must have an amazing swiss punk collection !The TNT 10", although not as poweful as the 7"s, is really good.

Good stuff for completists. TNT is amazing, altough the production is a bit weak compared to their 7"'s. the Debils sound hilariously amateurish, naïve and teenage. Joff and the Ram was the band which became the more famous "Young Gods", pioneers of noise rock.

I really enjoy those Swiss feasts.
I only own a few of those records, although I saw some of the bands live (I'm from Geneva)

I'd really like to hear Fresh Color's 12" with the song "Punk partout"
Thanks !

Thanks you, Debils is a great punk bands !

i'm a little to late on these vinyl feast. any chance of getting a reupp??? i would be most appreciative

I realise that this is an ancient/dead post but thanks so much for the Debils LP. Made In Switzerland really smokes!!