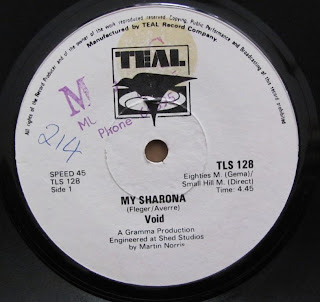 This post is more for the obscurity / novelty factor than anything else. According to the South African Rock Encyclopedia, the band eVoid began in 1979 as Void. They spent about 8 months in Rhodesia / Zimbabwe in 1979 where this single was recorded. Described as a "a pogo-inspired cover of The Knack's My Sharona" I thought it might be worth checking out. It didn't give me the urge to jump up and pogo around the room but maybe you'll disagree. It did however manage to make it to #3 on the charts in Zimbabwe in January 1980. There were no other releases until 1983 when the name changed to eVoid. I don't know if it ever came with a picture sleeve.