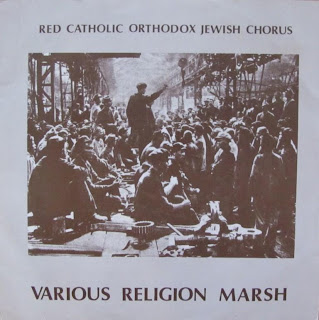 This one is somewhat of a mystery: 2 untitled songs with not much info at all. The 2 sides are labeled as "B" and "BB". Discogs gives the year as 1983 while Punk-Disco puts it at 1981.On the back of the sleeves are the names "Daniel", "Edy" and "Spycher", presumably the band members. "GT" guested on "B". It shows up in punk discographies but it isn't exactly punk unless your idea of punk includes terms like abstract, goth, experimental or minimal. This Swiss punk and new wave discography doesn't give a year but lists 2 other releases from 1984 that I've never seen.

All the information I had has been from the FEATHERED APPLE site where I bought the record some 5 years back. There was also stated that the GT was the same GT (Christian Trüssel)who was in GRAUZONE.

There only ever was ONE record released under the name of Red Catholic Jewish Orthodox Chorus.

The other two records mentioned on Lurker's Swiss punk wave discography were actually released under a completely different band name.

The three records mentioned on the Swiss Punk disco have got something in common, they were all recorded by DANIEL, EDY, SPYCHER & GT, so you might file the 3 records under the name of DANIEL - EDY - SPYCHER - GT. The first one (Red Catholic Orthodox Jewis Chorus) had the number "1" listed in between the names of the bandmembers. Wanderwege / Ins Pluratorium came with the number "2" in between the names of the bandmembers to indicate that it was the 2nd record released by SPYCHER - DANIEL - GT - EDY, while their double EP should actually be called "3"